I recommend every Indiana Citizen obtain the CCW permit now that it is free. It does not matter if you do not OWN a gun, this still allows you to carry (or have in your car) without violating gun laws. The correct reason for the permit is self defense.

For instance, if a relative leaves his gun in your vehicle even without your knowledge or consent, and you get stopped but have a carry permit then you are not breaking the law because you have the permit. If you do not have the permit it can be jail time even through you did not know there was a gun in your car. We do not yet have Constitutional Carry recognizing the US Constitution as Supreme Law in Indiana. Yet.

Also, with the present political environment there is a major push to totally disarm all citizens so they can be intimidated and controlled by threat of deadly force. Having a fully armed State (as demonstrated by the number of CCW permits) will reduce our chances of being the first place corrupt politicos send their minions to conquer.

As of today the Indiana lifetime gun permit fee is $0.00.
Here is how to apply:
1. Start your application at the Indiana State Police web page here:  https://www.in.gov/ISP/2829.htm
2. Schedule appointment to submit your fingerprints electronically.
3. Visit your local police agency.

The most troublesome characteristic of Critical Theories is that they are absolutely opposite of the Bible:

1) all sin is permanent, based only on skin color and never on actions – God cannot forgive or remit sin

2) white people are always the sinners: everyone else is innocent and oppressed

4) people who are not white have “special knowledge” based upon stories they tell instead of facts. The stories are superior to facts and over rule facts.

5) justice is whatever a not white person says is justice, because they have “special knowledge” and “white people cannot understand” and is based only on stories.

And many churches are teaching CRT and apologizing (sin cannot be forgiven so there is no repentance, only continuous apology) for the color God created the people in them. 1 Tim 4.

Voddie T. Baucham, Jr. has much to say on it. Fault Lines: The Social Justice Movement and Evangelicalism’s Looming Catastrophe (Salem Books, 2021)

Obligatory photo of shop kittie inspecting transformers while I try to get work done.

For when I’ve wrote a sad li’l prose
I can not stop my crying!

I’ll read the words I just have wrote
my thoughts are there a-lighting!
It pulls me right into that page
I’m trapped by my own writing!

It’s like I’m there inside the page
I’m part of what was written.
And like a snake was hiding there
my heart got strangely bitten!

But I myself would rather be
alive than live a dying!

Years ago I heard a tail,
of three great kings brought to fight hell.
Asked each he did, what threat they posed,
the first he mocked, the second disposed.

The third at last he asked again,
“what weapon have ye to end my reign?”
“Truth” quoth the third, as Hell shrunk back.
The others bowed, their voices cracked.

No greater weapon in life exists,
the light of Truth, every lie evicts. 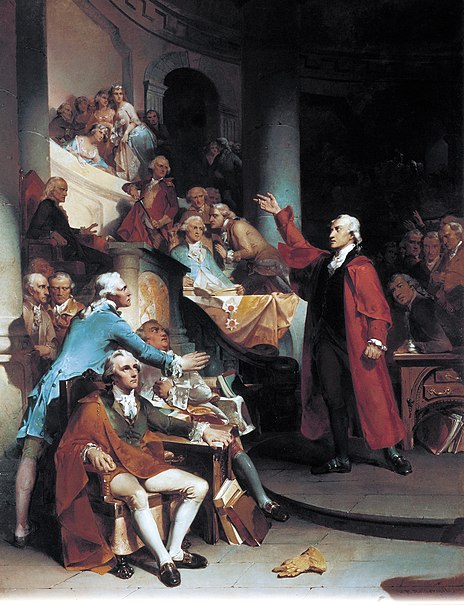 Patrick Henry Before the Virginia House of Burgesses, Peter F. Rothermel (1817–1895). This work is in the public domain in the United States because it was published (or registered with the U.S. Copyright Office) before January 1, 1926. This file has been identified as being free of known restrictions under copyright law, including all related and neighboring rights.

How long are we supposed to put up with these socialist saboteurs? It is natural to man to indulge in the illusions of hope. We are apt to shut our eyes against a painful truth, and listen to the song of that siren till she transforms us into beasts. Is this the part of wise men, engaged in a great and arduous struggle for liberty? Are we disposed to be of the number of those who, having eyes, see not, and, having ears, hear not, the things which so nearly concern their temporal salvation? For my part, whatever anguish of spirit it may cost, I am willing to know the whole truth; to know the worst, and to provide for it.

I have but one lamp by which my feet are guided; and that is the lamp of experience. I know of no way of judging of the future but by the past. And judging by the past, I wish to know what there has been in the conduct of the Socialist democrats for the last ten years, to justify those hopes with which gentlemen have been pleased to solace themselves, and the House?

I ask, gentlemen, sir, what means this martial array, if its purpose be not to force us to submission? Can gentlemen assign any other possible motive for it? Have these Democrats any enemy, in this quarter of the world, to call for all this accumulation of massive corruption, voter fraud, masses of illegal aliens, antifa attacks, false flag mass shooting by Democrat operatives, Trump impersonators to sway and control the Congress that it may neglect its Constitutional duty to validate the very votes the Democrats desperately needed to pass with blind eye that they might seize power completely and unilaterally impose their executive orders to disarm us? No, sir, they have none. Their malice is meant for us; it can be meant for no other. They are purposed to bind and rivet upon us those chains which the Democrats have been so long forging.

And what have we to oppose to them? Shall we try argument? Sir, we have been trying that for the last ten years. Have we anything new to offer upon the subject? Nothing. We have held the subject up in every light of which it is capable; but it has been all in vain. Shall we resort to entreaty and humble supplication? What terms shall we find which have not been already exhausted?
Let us not, I beseech you, sir, deceive ourselves. Sir, we have done everything that could be done, to avert the storm which is now coming on. We have petitioned; we have remonstrated; we have supplicated. Our petitions have been slighted; our remonstrances have produced additional violence and insult; our supplications have been disregarded; and we have been spurned, with contempt.

In vain, after these things, may we indulge the fond hope of peace and reconciliation. There is no longer any room for hope. If we wish to be free² if we mean to preserve inviolate those inestimable privileges of Individual Liberty and God given Constitutional Rights for which we have been so long contending, if we mean not basely to abandon the noble struggle in which we have been so long engaged, and which we have pledged ourselves never to abandon until the glorious object of our contest shall be obtained, we must fight! I repeat it, sir, we must fight! An appeal to arms and to the God of Hosts is all that is left us!

They tell us, sir, that we are weak; unable to cope with so formidable an adversary. But when shall we be stronger? Will it be the next week, or the next year? Will it be when we are totally disarmed, and when a Socialist guard shall be stationed in every house? Shall we gather strength by irresolution and inaction? Shall we acquire the means of effectual resistance, by lying supinely on our backs, and hugging the delusive phantom of hope, until our enemies shall have bound us hand and foot? Sir, we are not weak if we make a proper use of those means which the God of nature hath placed in our power.

Besides, sir, we shall not fight our battles alone. There is a just God who presides over the destinies of nations; and who will raise up friends to fight our battles for us. The battle, sir, is not to the strong alone; it is to the vigilant, the active, the brave. Besides, sir, we have no election. If we were base enough to desire it, it is now too late to retire from the contest. There is no retreat but in submission and slavery! Our chains are forged! Their clanking may be heard on the plains of Washington D.C.! The war is inevitable and let it come! I repeat it, sir, let it come.

Why stand we here idle? What is it that gentlemen wish? What would they have? Is life so dear, or peace so sweet, as to be purchased at the price of chains and slavery? Forbid it, Almighty God! I know not what course others may take; but as for me, give me liberty or give me death!

“Give Me Liberty Or Give Me Death!”, Patrick Henry to the Second Virginia Convention on March 20, 1775 at Richmond, VA.